All about Disney World + Disney Creators!

Wow, where do I even begin? This trip was a once in a lifetime opportunity and I feel so grateful to have even been included!
To give a little back story to this trip i was invited by the Disney Creators team among about 100 other influencers/bloggers! Disney puts on a creators conference where they bring in Disney’s best of the best to come in and talk to us, give us tips/tricks to help us grow our brand as well as fun little Disney magical things along the way!
We got to hear from the official voice of Mickey Mouse for the last 10 years, get exclusive looks at things coming to all the Disney parks from one of the head imagineers, hear from an author of all things Walt Disney who has studied the legend and his family for many years as well as a surprise speech from Tamron Hall herself! It was jam packed full of information and I took away so much from the conference but one of my favorite things was being surrounded by so many amazing creators who have the same passion I do and seeing so many different take aways and such amazing content being produced by everyone! Truly inspiring!
I’m going to do a little break down of what each day looked like to help you get an idea of how incredibly busy we were PLUS how much freaking fun we had! Plus I had a few questions I wanted to address so I’ll add that to the bottom as well so you guys can read through those!

Here’s just a few questions i received over the week so I wanted to share them with all of you!

Why did y’all go to Disney without your kids?
We got this invitation to join the Disney creators in November and when I got the invitation I cried so many tears! lol Matt kept asking what was wrong and I told him I was just SO happy! I have been dreaming of working with Disney since I started blogging so this was a HUGE accomplishment in my eyes! Once we found out the dates I immediately went to Greleigh’s cheer calendar and saw that this was the week of her mandatory NCA practice week and there was NO way she could go! Once I figured that out i just knew in my heart I couldn’t take the boys and leave her at home so Matt and I decided that we would just make this a mommy/daddy trip and go enjoy Disney alone! Little did we know we would be bringing a little babe along just in my belly!
What are your favorite rides?
So being pregnant at Disney there are so many rides that you can still ride because it is a very family friendly park! There are even rides that your small babies can ride on with you which I love! Of course I’m and adrenaline junkie so I had to miss out on those rides like Tower of Terror, Rockin’ Rollercoaster, etc! I’ll link a post that I used to reference all the rides in one spot! READ IT HERE
Did y’all get to ride Rise of the Resistance?
Yes, Matt got to ride it! He said it was an unbelievable experience! It wasn’t approved for pregnant women to ride so I will always err on the side of caution and just sit it out! I was bummed to miss out on this once in a lifetime opportunity because they actually closed the park down and we were the only ones in the park for Star Wars land! It was SO cool! But I’ll be back one day and will hopefully  get to experience it but baby will always come first!
What was your favorite “snack” at Disney world?
I am always a sucker for a Mickey bar! They are so incredibly delicious! The chocolate is so thick and the ice cream is so creamy and YUMMY! Great, now I want one! My other favorite is the Mickey pretzel with cheese! Oh, and I can’t forget the churro! OMG, now I’m starving!
What is your favorite park?
I feel like this is such a loaded question! It’s hard to distinguish the parks on favorability because they are so different and Disney is so strategic about putting huge attractions in each park to draw in the crowds! Epcot is super adult friendly because you can eat and drink around the world yet, brings in droves of families because it is home of the ever so popular Frozen Ever After ride. Magic Kingdom is just that, MAGIC! There is something so iconic about the castle and just the atmosphere that I get chills just walking down Main Street! Animal Kingdom is full of amazing structures and it’s just breathtaking to see the nature and animals! We love the safari and Pandora is just absolutely out of this world! Hollywood Studios is always a big hit because my family loves big rides and two of our favorites are there, Tower of Terror and Rockin’ Rollercoaster. Of course now Toy Story Land has quickly stolen my heart! It’s so bright and just every kid’s dream! Star Wars Galaxy’s Edge was something I was so excited to see and it didn’t disappoint! It felt so real everywhere you looked and was truly an immersion experience!
Do you recommend the Disney dining plan?
100% yes! I mean I guess this is a personal preference but I like having everything paid for upfront so that way if I want a Mickey Bar I walk up and they scan my band to use my credits and I don’t think about spending $8 on an ice cream!
Is there alcohol in the parks?
Yes, and all the parents rejoice! Nothing helps a meltdown more than a glass of wine or an ice cold beer! The only park that doesn’t have alcohol on the street per say in Magic Kingdom, you have to get it in a sit down restaurant!

I hope this gave you a great little peek into our first 3 days with the Disney Creators team! Again I am so thankful for this opportunity and can’t even believe it happened to me honestly!! I’ll share more about the 2nd half of the trip soon because I have SO much to say about the Disney cruise as well! Thanks for hanging around if you read this entire post!! You deserve an award! See ya real soon!! 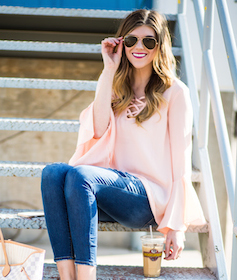 Hey y’all! I’m Bailey, welcome to my “every day” life. Wifey. Mama to 4 babes. Sharing our everyday life with some cute pictures, fun outfits and my heart!

You can find out more about which cookies we are using or switch them off in settings.

This website uses cookies so that we can provide you with the best user experience possible. Cookie information is stored in your browser and performs functions such as recognising you when you return to our website and helping our team to understand which sections of the website you find most interesting and useful.

Strictly Necessary Cookie should be enabled at all times so that we can save your preferences for cookie settings.

If you disable this cookie, we will not be able to save your preferences. This means that every time you visit this website you will need to enable or disable cookies again.